Woahh, what's with the title? What's that? Life partner?

Okay, I admit that's a bit overboard but today's post is going to be about it. Yup, it is it.

I met it everytime I went to the stationery shop or Mr. DIY but I had not develop any feeling at that time. I saw it but I just ignored it. It looked very nice and attractive though but I just did not have any interest on it at the time. My childhood and my 10 years-old brother's childhood were different and it was him who influenced me.

I grew up playing congkak, mak-mak, riding bicycle around the village and got myself involved with the jungle and its treasure like the tall trees, mosquitoes and leeches meanwhile my brother grew up playing with his car sets, robots, playing card games which I don't like the most and making PS2 as a must-played game every week.

I understood him very much and because he is a boy so I got it when he played with his favourites. The thing is, there's this small structure of blocks that he always left them lying around on the floor and causing other people to endure pain when they accidentally step on them. So I decided to collect them all and just kept them while thinking the next plan for them.

That night, I kept staring at the small blocks and examining each one of them. Suddenly, I got and idea to reuse them to make a better buildings or structures. I watched varieties of videos about the blocks and now I've already got a city to develop.

And, I'm presenting you my life partner :- 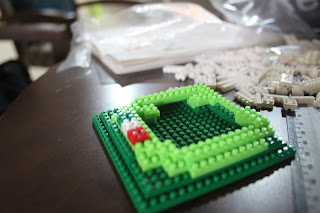 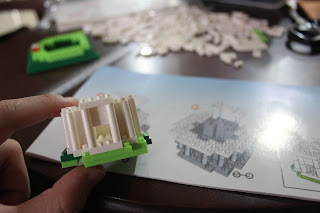 
Yup, it's called Lego! I am totally in love with Lego and I can spent hours with the blocks creating buildings and bases each with different colors.

I feel very happy to see the blocks finally stick to each other and there stand a beautiful building. I arrange them very neatly and I check on them everyday.

I am very satisfied with myself and am looking forward to collect more of them. I guess this post ends here so if you guys would like to share with me your interests, I am glad to know about it! See ya!
on April 19, 2018
Email ThisBlogThis!Share to TwitterShare to FacebookShare to Pinterest