Assalamualaikum and hi. I don't intend to write a long entry this time. It's just about the current update of my studies for the next semester. It has been determined that the next semester studies will be conducted completely online including the lab practicals. At first, I'm not either upset or content with the news, it's just that I don't really care much about that. Either way, I still have to do my best and when I think again about that, I think it's fine though. I don't want to dwell so much in the dark side of what has happened, so basically, looking on the bright side, I can help my parents with the house chores, helping my brothers and sisters with their schoolwork and prepping myself with some skills and know-hows.

On the other hand, I cannot meet with my friends and engage in social activities that we used to do before the pandemic hit. I especially want to meet my former roommate during my first year. She was exceptionally kind and beautiful too and she still is. To be blunt, I was nervous at first for getting a beautiful roommate like her. But she was so different from what I expected her to be. Not that I thought she was some kind of mean girl or anything but she appeared to be hard to approach. At first, I thought it was fine if we weren't close and such, but because both of us are in the same course, so the time for our classes was definitely the same. From that, we started to go to the classes together.

I can't really remember who approached who first but everything went very well. When I told her that I didn't manage to secure a place in the same college for the second year, she was like, "What college did you get?" "I got college X," And she replied, "That's fine, we can hang out and eat there together next time," And my eyes just beamed just like how the eyes that were drawn in the manga. Frankly, I'm not exaggerating. Now that we aren't roommate anymore, we still talk to each other through messages and there is no awkwardness at all. I thought I wouldn't be able to talk to her again comfortably because of the pandemic considering only months of getting to know each other but that's not what happen. I seriously want to meet all my friends again and honestly, I myself am in a shocked state of writing about this now as I'm not a very sociable person and due to the limit I put for my social circle. Even so, I do want to meet them. Meeting them is the moment where I realized just how much fun having friends that can accept you can be.

I noticed too that I am being selfish towards my friend and of course towards myself but they have never left me out. I've never seen myself to be fixed in any particular group of friends so basically, I've made up my mind already in case I would be left alone. Being alone is scary and it still is but they helped me through and through. The situation I landed in the university was totally different at that time. There were groups and all but that wasn't a problem at all. During high school, I often felt very anxious for having to choose to go with either this group or that group and choosing one would mean losing another one and that applied to other things as well, like wearing the armsocks or praying in the dormitory. And maybe because we all were just children, having so childish mentality and immature thinking. But everyone has grown now and I believe we are all striving to be better. I'm trying too ^^

There's a lot of memories carved during the first year of physically meeting and hanging out with my friends. Everyone has their own colors and so do I. I don't want the colors turn bad when mixed. I want to make it beautiful even though they are different. I learned and am still learning to fix myself to be a better friend for them too.

on February 23, 2021
Email ThisBlogThis!Share to TwitterShare to FacebookShare to Pinterest 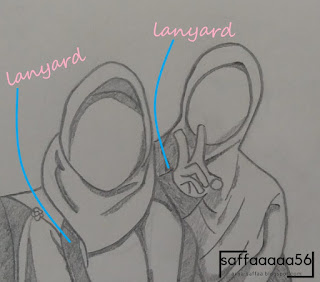